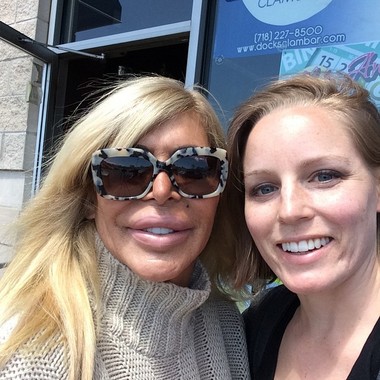 made her first public appearance Sunday since her life-saving operation on a cancerous throat tumor.

The occasion was a charity bingo brunch at Dock’s Clam Bar in Tottenville, which sought to raise money for Save the Children Foundation’s rescue efforts in Nepal after the country’s devastating earthquake.

Ang, the star of the Staten Island-based docu-soap“Mob Wives,” was her old self at the event, greeting fans and calling out bingo numbers with her characteristic sass.

She wore a turtleneck sweater covering a scar that stretched from one side of her neck to the middle of it — where doctors removed the grapefruit-sized tumor from her throat.